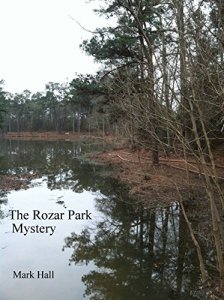 ‘A short story mystery set in middle Georgia involving a man apparently killed by a falling tree at a local park, a strange animal’s footprints, bizarre Craigslist postings, and an exciting ending! Written by a former US Marshal with over 23 years experience in the area.’

As stated in the description, this is a short story (9,830 words) that makes it suitable for all readers no matter where they happen to be: commuting; waiting for appointment; between appointments; relaxing; etc. Also, as implied in the title, it would appeal to any reader who enjoys a mystery.

A US Marshal is called in when a body is found in Rozar Park, hence the title. With him is his friend Chris who, the reader is ultimately informed, is in the witness protection program. Very little is known about Chris but he quickly proves his value; initially by noticing anomalies regarding the body’s position and subsequently in the ongoing investigation. Besides the body’s position, there are other unusual elements, including some odd newspaper adverts, which intrigue and eventually lead to the truth. The story certainly does not end up where expected.

This is an enjoyable book though some readers may not always like the style. It is often clumsy, particularly in places where the author is attempting to establish the physical scene and scenery. Nevertheless, and in total fairness to the author, those passages do not detract from the tale: it remains enjoyable.

With such a short story, it would be unfair, to author and potential reader alike, to outline any further details.

Three stars (3*). See ‘Assessing Book Review Ratings ‘ for an understanding of how this website views the book rating system.

The book is only available in digital (e-book) format.

Smashwords (in various formats to suit all devices) It is free here.