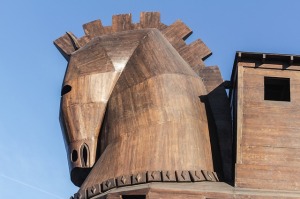 The terms ‘Trojan’ and ‘Trojan Horse’ tend to be used interchangeably. There is no difference: they refer to the same thing. A Trojan is a form of malware.

Note: As will be mentioned a number of times ‘Malware’ is the correct ‘umbrella’ term when referring to computer viruses. However, as, colloquially, the term virus is more readily understood, both will be used throughout discussions that relate to the topic.

The name ‘Trojan/Trojan Horse’ has been adopted from Homer’s The Iliad, an ancient Greek tale that includes the story of how the Greeks gained access into the city of Troy be means of a wooden horse, within which some soldiers were hidden. It was secretive and devious just in the same manner malware is designed to be.

Trojan refers to any malicious computer programme that misleads users as to its true intent. They often look like a legitimate programme and may use the same name as a legitimate app (software application). All designed to trick a user.

Trojans are not viruses per se in that they cannot reproduce or self replicate by their own accord. Nor do they try to insert themselves into computer files. They are essentially just another type of programme that may be implanted into a computer. Trojans are rarely inserted individually but are usually downloaded along with some other virus.

Note: Trojan infection is not limited to computers: other devices (smartphone, tablet, etc.) may also be targeted.

Though Trojans are not viruses in the conventional sense, they may be used to impact a devise and to collect similar information as most malware:

Trojan’s are particularly known to create ‘Backdoor’ access, enabling the person(s) behind them to control the computer/device. Though control is a Trojan’s primary purpose they also enable cyber criminals to:

Proxy Servers – The last point in the above list: The cyber criminal behind the attack may, well probably will, want to access and deal with immoral, criminal, illegal, programmes and material. Not wanting to use their own computers or have them identified as the source, Trojan’s enable them, by stealing a computer’s IP address, to have the victim’s device identified as the source with the consequent dangers of law enforcement investigation and action. The Trojan can be programmed to cover its tracks so usage will not appear in the computer’s history list. Very nasty all round.

How Trojans infect a devise

As with most viruses, Trojans may be inadvertently downloaded by a variety of means:

Note: As already mentioned Trojans cannot reproduce or self-replicate in the way some other viruses can. Infection is reliant upon a user making some sort of mistake or visiting a malicious website.

Trojans can be remarkably hard to identify, especially as some of their impact may be similar to that of other identifiable malware.

Note: Remember some of these signs are similar to those encountered with the usual viruses. However, there are also a couple of others that are not normally encountered.

Basically, any anomaly in the computer’s behaviour.

A computer worm is a standalone programme that replicates itself in order to spread from computer to computer. Primarily affects networked computers; mostly utilised within businesses or large conglomerates.

Note: Though this series of articles are principally directed toward individual, private, computer users it is worth mentioning computer worms because they could impact a user who has two or more personal computers/devices linked (networked).

Worms do not generally attempt to change computer systems or files but they do aim to:

In recent years, the function of some have been changed/augmented so that they may now also:

Though not designed to change systems and files, worms can cause a computer to work less efficiently because they take up system space meaning other programmes are unable to work at full capacity.

Worms may also be used to facilitate the spread of other malware (viruses).

How Worms infect a devise

Along with most viruses, worms can be inadvertently downloaded through:

Once a worm has entered a network, it no longer requires any human action to spread. A Worm:

Detecting a worm can be difficult. Some of the following occurrences may indicate one has entered a computer’s system:

Removing a Trojan or Worm can be difficult. In many instances it will probably be necessary to:

Note: Before attempting the above the computer should be disconnected from the internet and any network it is part of. Any external storage device should also be removed and, if possible, scanned separately.

It is accepted, having to take the above action is irritating but it is probably the only way to ensure the computer is completely cleared.

Note: If the type of Trojan or Worm is identified it may be possible (by searching the name or asking an antivirus company) to find specific instructions for removing it. Utilising the computer’s antivirus software scan facility may also help especially as they are being constantly updated to deal with new developments. There are also some, valid, software programmes a user may use to detect and clear a system. These will be discussed in more detail in a subsequent article to be published toward the end of this ‘Computer Viruses’ series.

It is appreciated the following are consistently repeated within related articles but it is necessary to ensure users, for their own safety, continually bare the points in mind.

Apologies for length of this article but thought it necessary to include sufficient detail to make it comprehensible.

Trojans and Worms are not conventional viruses but can impact a computer’s functionality and make it susceptible to theft of information and malicious use.

Removing these type of implants can be difficult and it may be necessary for the average lay user to obtain the assistance of a computer programmer or their antivirus software company.

As with all these issues, users should ensure they consistently follow the recommended precautions and take preventative actions.

Though worrying, and scary, users should not panic. One way or another all these issues can be dealt with, even if it does cause a bit of a headache in the meantime.

Disclaimer: The writer is not a computer programmer or in any other way a computer software expert. What is shared has been learnt through limited personal experience and/or through research. Consequently, though every effort has been made, total accuracy of all the above information cannot be guaranteed.

The thoughts that crowd a jealous woman’s mind and where they may lead.

Is he looking elsewhere?