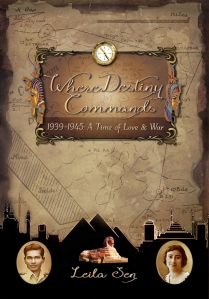 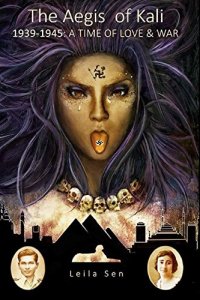 It is hard to do this book justice in a short review. The sub-title ‘1939-1945: A Time of Love & War’ sets the scene and timing but provides no hint as to the considerable details and information included within this true tale of life and experience.

In this book the reader will be presented with vivid insights into various religious and social beliefs and customs; cultural understandings and acceptances; detailed accounts of World War Two (WWII) campaigns and battles; the human costs of war; the undying determination of true love; the fears of change; the loyalties of family; and much more.

The preface centres upon explanations of the goddess Kali that helps the understanding of those not of Indian extraction. This is followed by a prologue detailing much about the roots and participants leading up to WWII. Thereafter, the primary protagonist’s (Santi Pada Dutt) tale commences. Though this is a time when India was seeking to free itself from British control the imminent aspect of impending war caused many to refocus. Yes, they still wished to throw off the British yoke but most realised this would have to be postponed so as to deal with the evil ambitions of those who sought to subjugate them. To this end Santi Dutt, a doctor by profession, enlisted.

The primary setting for this tale is the Middle East and the North African desert warfare campaign which saw mixed results until the British forces were ultimately victorious. There are incredibly detailed accounts of the campaigns, battles, skirmishes and tactics and of those who participated. The historic detail really is quite something and there is little doubt the book could be used, by those interested, as a reference work. Accepted, this may not appeal to all readers however, the author’s style makes it very readable. It is also the realistic brutal background to the tale of love and perseverance which helps the reader understand the uniqueness of the romance playing out in such a scenario.

The historic detail is not limited to WWII. The histories of individuals, families, cities and cultures are intermixed with those pertaining to the war. These include the horrors and tragedies of war both personal and communal. The ‘human costs’ are more than communicated and may well bring a tear to the reader’s eye. The author also uniquely conveys the emotions, fears and conflicts of all participants whether it be in the scenarios of war, society, family or love. The love story in itself is captivating.

The tale also moves smoothly and effectively between scenarios: from Santi’s war experiences to Hedeya’s (Santi’s love) home where the reader receives not only information about her family but also about her own cultural practices and beliefs. Readers are also treated to dietary insights many based upon the unique seasonal food grown within the regions.

Though a longer than average book (at least for these days at 567 pages) it is very readable and one most readers will wish to revisit. There is so much contained within the pages that one read is not really adequate to take it all in though, due to the author’s excellent writing style, it is by no means an arduous read. All characters (not just the protagonists), locations, scenes and actions are conveyed in a manner that enables the reader to clearly visualise them without difficulty.

A considerable amount of research must have gone into this book for which the author is to be commended. She has certainly conveyed all information in a very presentable and understandable manner; no need for anyone to have a degree in wartime history. The contents of her families papers (the author is the daughter of the protagonists) are also presented in a meaningful manner which tie into the tale very well. The supporting photographs, especially those from the family archive, also add another valuable dimension for the reader.

So much more could be said but rather than make this review excessively long readers are recommended to obtain the book for themselves.

This is truly a literary work that adds to the world’s treasure-trove of such.

Five (5) (+) (+) stars. – The usual five star rating offered by most book related sites is considered inadequate to reflect the quality of this book.

Reason for two editions: Due to legislative requirements in some territories the author found it necessary to publish two editions utilising different titles and covers. Other than that the content is identical. Details and urls follow:

Both editions are available in paperback and Kindle e-book formats.

Note: As may be seen, the front cover design for this edition is unusual, so much so the author has provided a descriptive explanation:

‘Mythology tells us, in an attempt to mitigate Kali’s escalating rage as she battled against the forces of evil, her husband, Lord Shiva, placed himself in her direct path. When Kali’s foot inadvertently touched her husband – an irreverence for any Hindu wife – it not only halted her fury, it prompted her to ‘bite her tongue’ in an involuntary reaction of shame signified in every image of Kali by her protruding tongue. Hence the placement of that ignominious emblem, the Nazi swastika, on Kali’s tongue to contrast with the symbol on the goddess’s forehead – the area of a third eye – which represents her four arms wielding her powers as well as her blessings.

Her tears flow from a mother’s sorrow for a world at war, and the awful destruction of her children.